Start a Wiki
Welcome to Crysis Wiki
The wiki about the Crysis series that anyone can edit.

Crysis is a science fiction first-person shooter video game developed by Crytek, published by Electronic Arts for Microsoft Windows personal computers, and released in November 2007. The game is based in a future where an ancient alien spacecraft has been discovered beneath the ground on an island near the coast of the East Philippines. The single-player campaign has the player assume the role of United States Delta Force operator Jake Dunn, referred to in-game by his call sign, Nomad. Nomad is armed with various futuristic weapons and equipment, most notably a "Nano Muscle Suit" which was inspired by a real-life military concept. 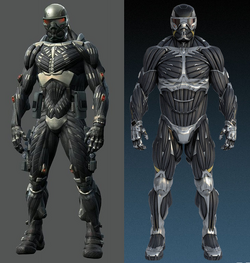 Comparison of the original nanosuit (left) and Nanosuit 2 (right)

Retrieved from "https://crysiswiki.fandom.com/wiki/Main_Page?oldid=4340"
Community content is available under CC-BY-SA unless otherwise noted.